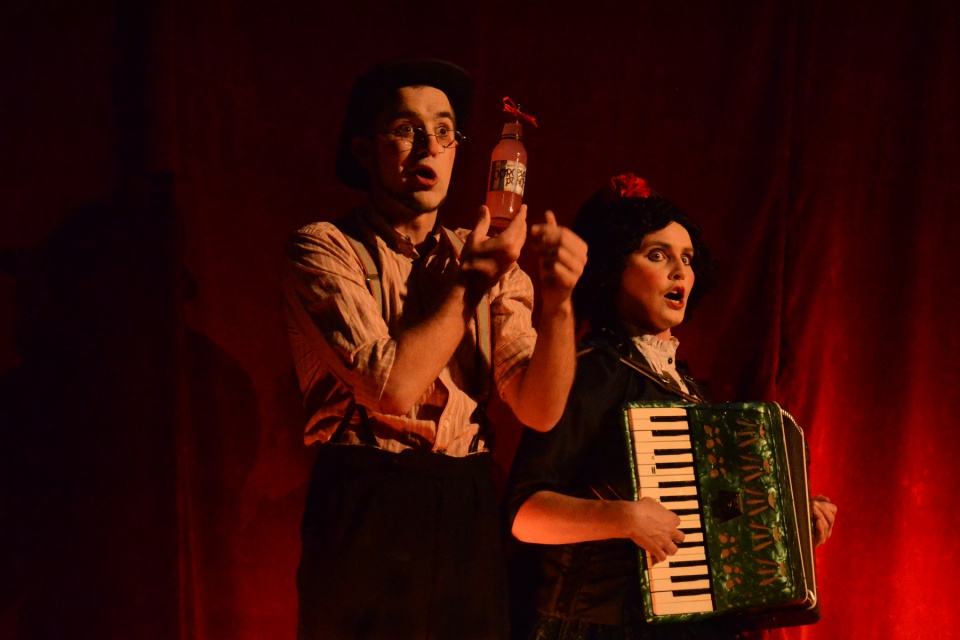 In 2013 Critical Stages Touring (then ‘Critical Stages’)  took The Porcelain Punch Traveling Medicine Show on a whirlwind tour of regional Victoria from Kingston Arts to Colac Otway Performing Arts Centre, and from Apollo Bay’s Mechanic Hall to the lovely Phee Broadway Theatre in Castlemaine. It was the beginning of a beautiful arts friendship that continues today with two of those artists Christy Flaws and Luke O’Connor of the multi award winning indie company Asking For Trouble.

Immediately following the tour the team captured their tour experience with writer Ailsa Wild in an article that we are so lucky to be able to share here with you. It’s an emotional reminder of the camaraderie, passion and care that theatre makers have for their craft, each other and their audiences…

I went to a Porcelain Punch rehearsal last week: up the Irene-warehouse stairs, through smells of spices and acrylic paint. I made room for myself on a floor covered in velvet curtains, a baby-change mat, juggling knives and hoop skirts. And of course, the Punchies – the five current performers of Porcelain Punch, an independent theatre company making contemporary vaudeville.

The Punchies: Madeline (Madz) plays the accordion and the mandolin and sings out rich and wild, her voice driving me into the secret corners of the show. Alex has a clear face with wide, blue eyes, which make me forget to watch his tricks. He has passed me in a festival crowd, feet on bicycle handlebars, his face bright and silent. As a performer he doesn’t ask the audience for anything. He simply holds a compelling spot in the space and I am drawn to watch.

Luke and Christy are acrobats who’ve lived together in a 1963 J2 Bedford truck for five years now, sharing a tiny bed and key roles in at least three independent theatre companies. With the fifth performer Emilie, they are the producers of Porcelain Punch. Emilie and Christy bounce off each other to tell me what they like about co-producing:

“Knowing that things get done.”

“Knowing you can delegate.”

“Knowing that other people are as passionate as you are.”

Porcelain Punch have lugged their old-time wooden props cases across several Australian states and New Zealand, and set up their red velvet stage drapes in Fringe Festivals, Falls Festivals and small-town regional theatres. They last set off on tour when Emilie’s baby, Olive, was just 6 ½ weeks old. Now, two months later, she lies in my lap, eyes slipping around the room in charming, baby amazement.

Emilie says touring with Olive gave her a bigger sense of what the ‘carnie family’ really is: “It’s professional work meets family meets ‘you can do anything’ meets everybody looking after each other.” She pauses. “It’s pretty nice.”

Amongst these performers there’s a fierce and wonderful determination to make this tour possible for parents.

Their tour stories are full of peacock feathers falling apart all over Emilie, hot-glue-gunning costumes at the last minute, while Olive is settled in a bouncer in the corner. The punchies laugh about winning pub trivia while feasting on oversized parmas and talk with delight about gorgeous old country theatres refurbished since Kevin 07’s stimulus package and tables laden with vanilla slice, lamingtons and party sausage rolls after the show. Not to mention regional arts workers who are full of warmth and welcome. On a regional tour your contacts are so often the people who work the hardest for arts in their community.

The Punchies love getting a sense of each community as they travel. And they really tell the story of community when they talk about their art – a community of makers. “No one person sits down and says, this is what you’re going to do,” Emilie says. “Things get dreamed up collectively… so ideas almost have their own wings.” They develop characters out of found objects and costumes and they play together. They play while searching for moments of gold, trying, choosing, developing, digging and playing some more. They’ve been doing it for long enough that they trust each other’s ideas.

“You learn to communicate so the others can play with you.” Christy says. “You’re thinking about them [your collaborators]. You think, these people need this kind of attention right now, so they can listen to the next idea.”

Their process is collaborative, not just with each other, but also with previous cast members, a crew of directors, engineers, costume designers, lighting designers, writers and musicians. Even Emilie’s tattoo artist. Nick, who has been tattooing Emilie for the last ten years, is a collaborator. From these collaborations come luscious visuals, performance with exquisite precision and a theatrical world pulsing with nostalgia.

In one scene Emilie, as little Shirley Crumple, spins around and around, her dizzy face drunken and cross eyed, while a morphed Chitty Chitty Bang Bang track escalates with tension. Audiences from have laughed so uncontrollably at this scene it’s stopped the show. Such a connection with theatre tells audiences something about themselves and the Punchies are very conscious of a responsibility in this. “We don’t do crap gender roles,” one of them says as they discuss their philosophy as makers. The others nod emphatically. As we talk, it becomes clear that the Punchies care deeply about what ideas they represent.

They also care deeply about each other, and this caring is what enables their work. When Olive gets restless Christy takes her and tries to keep the attention of those wandering baby-eyes. It gives Emilie time to stay beside me. Time to articulate her thoughts.

You can find out more about Asking For Trouble and their work at www.askingfortrouble.com.au. Keep an eye our What’s On page for future production and touring news.